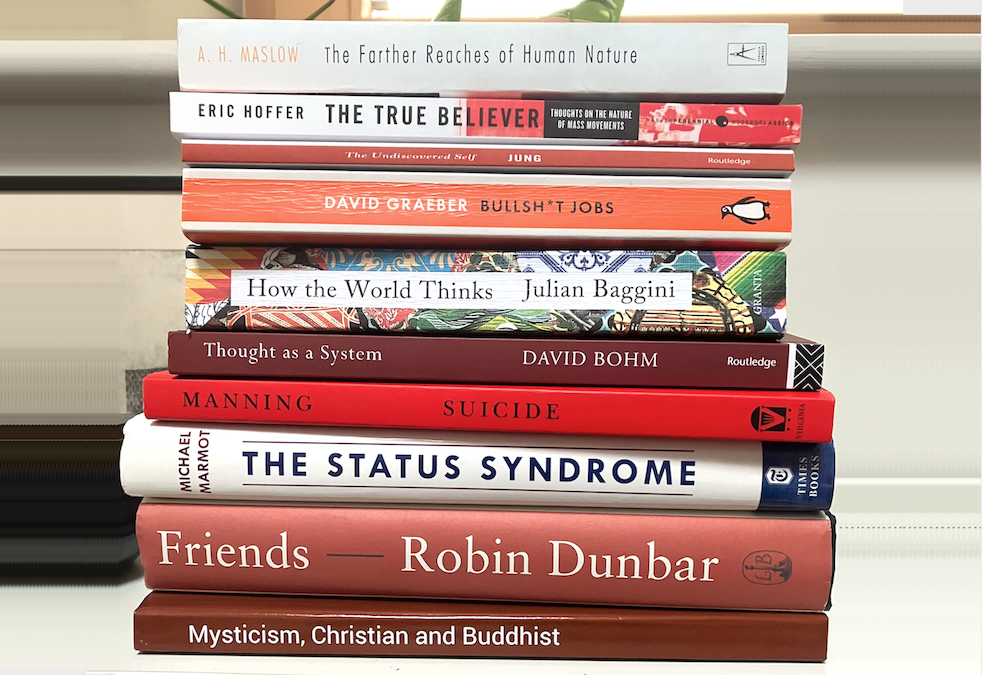 As the year draws to an end, I thought I would share a selection of 10 good books I read in 2022. In no particular order:

In this 1971 classic, Maslow draws on his experiences interacting with so-called ‘self-actualising people’ to ask what makes them different — he explores how they embody a ‘way-of-being’ that is expressed in living with a deep sense of purpose and connection to their values.

“The True Believer” explores the collective psychology of mass movements — whether religious, nationalist or secular. Eric Hoffer uncovers their many similarities, along with the various conditions that create a fertile space for mass movements to emerge.

3. The undiscovered self — Carl Jung

Writing in 1956 in the shadow of WWII and the Iron Curtain, Carl Jung looks into the psychological condition of the modern human — how the denial of the inherent darkness within us, only makes us project it even more strongly on to others. The book is relevant today as it was then.

In this remarkable work, David Graeber uncovers how ‘Bullsh*t Jobs’ have proliferated in the modern economy. He explores many complex socio-economic and psychological causes, including our very existential relationship to the concept of work.

5. How the world thinks – Julian Baggini

Baggini attempts an “outsider’s” comparison of major philosophies. From Nagarjuna, Confucius and Muhammad, to Plato and Hume — Baggini looks at how these ideas manifest in daily life around the world. The book could easily have bene called ‘What the West can learn from the East’

6. Thought as a system — David Bohm

A transcript of 5 discussions in 1990: Theoretical physicist, David Bohm leads an enquiry into the nature of “thought” — an intellectual and neuro-physiological system full of inner contradiction. The book is a nice companion to the video. It is a meditation into the very core of being.

Manning considers how suicide, while being an individual act, can also be understood as a social behaviour — a way of handling or escaping conflict, where “the structure of the relationship — degree of inequality, intimacy and interdependence, can explain variations”.

Marmot makes the remarkable finding that “autonomy and social participation are so important for health that their lack leads to deterioration in health”. He finds that social standing directly affects the amount of control one has over their life, and thus their health.

Robin Dunbar’s latest book looks at how the evolved nature of our brain limits the number, and types of relationships we can manage. He identifies fractal layers within the famous Dunbar’s number of 150, and how they involve human relationships of varying types and intensity.

The masterful D.T. Suzuki explores the little appreciated similarities (and differences) between Mahayana Buddhism, in particular Zen, and the Christian mysticism of Mesiter Eckhart. We find deep convergence at the limit.