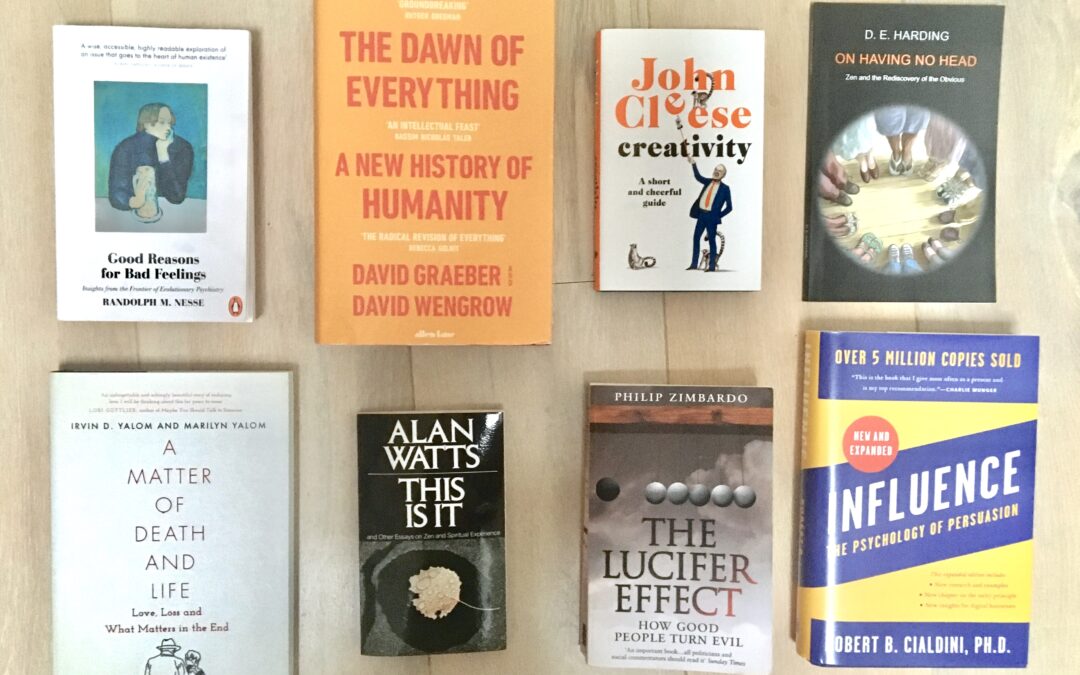 Evolutionary psychiatrist, Randy Nesse, warns against mistaking symptoms for diseases when it comes to emotions such as anxiety and depression. He explores evolutionary roots for ‘bad’ feelings and emotional disorders, and discusses how feelings can be like “smoke detectors” that become over or under active for different reasons.

500 pages that challenge many established narratives using the latest evidence from archaeology and ignored history. The Agricultural ‘Revolution’ likely took 3,000 years. Neolithic era likely had seasonal living arrangements with people shifting between small forager bands and large settlements. Evidence of pre-Greek democracy, why inequality has no origin, and much more. A thought provoking read about human history.

In this gem, comedy legend, John Cleese, draws on his own life to explore creativity and how we can find more of it within ourselves.
“When you’re being creative there is no such thing as a mistake. The reason is very simple: you can’t possibly know if you are going down a wrong avenue until you’ve gone down it.”

In this timeless classic, Douglas Harding explores the experience of Zen based on his personal journey. The book manages to be both a great introduction to Zen, and penetrate the very core of it. Superb!

With alternating chapters written by veteran psychotherapist, Irvin Yalom, and Marilyn Yalom, his late wife, after her cancer diagnosis — the book is a courageous account of coming to terms with death and life thereafter.

I thought I had read all of Watts, but discovered that I missed this pearl from 1960. In this collection of essays, the masterful Alan Watts explores ‘mystical experience’ and its relationship to ordinary life. Written in his typical easygoing and humourous style.

The creator of the (in)famous Stanford Prison Experiment explores the power of situational forces in our lives. The book has detailed accounts of Stanford Prison Experiment and Abu Ghraib prison tortures, where Zimbardo was called as an expert witness for the defense. The Lucifer Effect persuasively shows how we  can all do terrible things under the right conditions. A sobering read.

I’m ashamed to say I discovered Cialdini in 2021! I read both his 1984 classic ‘Influence’ and 2016 book, ‘Pre-Suasion’ back-to-back. He discusses 7 levers of influence — Social Proof, Reciprocity. Authority, Liking, Consistency, Scarcity, Unity — and how we are often manipulated by them.

While human psychology has been the specialty of philosophers, mystics and magicians in ancient times, today we have some newcomers — advertisers and marketers — and it is from this world that Cialdini speaks.